seems awesome if it would let me play

I tried this out and I think it is quite fun. I mean I love mmos and just doing around doing random quests. The combat system is really simple but why one problem is that why is there a cooldown for potions? Is it to make it balanced? Other than that I'm having a blast and always coming back to this game.

Anybody has a fix for this? The game loads, I see that I need to register for a split second and then the game goes gray and nothing happens?

The game going "gray" is unknown error for us. If possible, it would be nice if you could share some more info with us in our #bugs-and-support channel on our discord. https://discord.gg/YcJGgnxWzd

Hey everyone! I had a lot of fun doing a little first impression on the game. I would love to come back to it and check out what is outside the big bad world :)

Hope you enjoy the video and thank you for supporting this epic indie game.

I've played for a couple hours now and reached level 11, worked on professions to craft some nice weapons, and attempted the first dungeon. The fighting experience was not very enjoyable.

The game is tile grid based. Your character can only move a full tile in one of the cardinal directions. This is not a new concept, but it just doesn't feel right here. Maybe it's due to the low movement speed?

Back to the combat. Attacks are also happening on the grid. In the beginning, you can only attack enemies on a tile next to you. Later on, you'll start to see different attack patterns on enemies and weapons. Stripes, cross shapes and waves seem to be common in the level 10 range.

The game advertises its combat as one where you have to actively dodge and attack, and that's indeed something you have to do. The problems arise when trying to do both at the same time. While moving you can't use items/weapons and after using an item or a weapon you can't move for a short time. Combine this with slow player arrows / magic projectiles and melee weapons with tiny ranges and you got a recipe for frustration.

Another thing I noticed is the severe lack of item storage. You start with 20 bag slots + 10 hotbar slots, and you can add up to 10 more slots by doing certain quests. For reference, just working on professions can take up 20 slots alone, and it's not something you finish immediately. It's clear they want you to buy bag slots from the cash shop, and there are a few other things for annoying free players, although not as bad as the bag space problem.

There are some other minor issues that probably will be sorted out in a future version, such as lack of sound effects, bad music looping, weird cursor control etc. They are noticeable if you look closer but don't break the game.

The graphics are probably the best part of the game. The world is pretty, which makes just strolling around something fun to do. There are a lot of places to check out, but it feels like the game isn't utilizing them well. Hidden loot or other secrets could make exploring more interesting to everyone.

Another thing I really liked is the equipment-based class system. This way you can easily experiment with and switch classes however you want.

Overall I can say that this game was interesting to check out, but unfortunately the combat, which should be the core mechanic of an rpg, didn't live up to my expectations.

This game has some real potential. Props to the 2 creators. Unfortunately, there are many flaws.

When I started playing, I immediately noticed that the movement was very blocky and sluggish. It isn't horrible, but it definitely isn't smooth. There is also no sprint or dash feature, nor crouch, so you are stuck moving at the same speed for the entirety of the game. The game starts out pretty fun. You get some basic quests and get to talk to different characters.

The combat definitely is not the games strong suit. In order to fight enemies, you have to get very close and stand still while just holding down the attack button. There is very little freedom with the combat, and is less focused on skill and more on your gear.

The sound effects are horrible. The only sound for the game is the music in the background, besides the noise it makes when you press a button in the settings. There is no noise for fighting, or talking to people, opening doors, or anything.

The graphics arent fancy, but they are very simple and pleasant. The detail is also nice, and I feel that the graphics are the best part.

There isn't much of a story in this game. The character you control has the mission to find their stein, which is how the game is introduced. The game barely focuses on that, though. You mainly just wander around and talk to people in order to get quests, which are usually to fight creatures or find items.

Progression through the game:

The main focus is to fight creatures, but since the combat does not rely on skill, the way to do well is to complete quests and get better gear. Unfortunately, one feature is that in order to wear better gear and use better weapons, you have to be a certain level. This results in you spending your time grinding quests to get higher levels to get better gear, in order to just fight and grind even more.

This game has some great potential. The map is huge, the graphics are pleasant, and there are interesting items to collect. If it weren't for the bad combat mechanics, lack of story, and sluggish movement, I would really enjoy this game.

Such a great game! Leveling up takes a while, but the process is nice with new experiences on every corner you turn. The pixel graphics are detailed yet simple. Its a well made game with new updates and bug fixes and is great for all ages. When you are level 30(max level at the moment)there are dungeons that you can do with other players and get great armor from. The community is friendly and always there to help when you have questions. The only thing that I would say would be better is that you can't have a conversation with the NPC's. 10/10 game would recommend it to anyone who wants to find a game to play when they are bored or if they want to add some spice to there life!

Looks fun, but the browser isn't working for me and i'm on mac so I can't download the game :(

I'm forget where is the quest located because I like to take every quest available at the same time.

Its taking to long to load for me.

You know, I LOVE the game...but I would like a...like a graphics option...you know: low quality, med quality and high quality...(or even a ultra low quality lmao), cause I have a kind of slow pc and mobiles, and I don't think I'm the only one...so I think it would be better a quality option, this is just my opinion of course. (I know the game is pixelated, but my pc stills lags sometimes)

Also, I'm curious, what century is the game in?...

graphics and music are amazing!

I just wish i could move around a lot faster. And also. is there any way I can move around using only my mouse?

Cool looking game, but it'd be nice if I could run a bit faster or could run at all. Also weird is that there's no sound when attacking an enemy. Still, I'm kinda into this!

how long will this take

the computer version blinks on startup but loads, and the browser version from this site loads endlessly.

but it was fun

Very cool game, it simultaneously reminds me of tibia and runescape, both games I really liked to play when I was younger. This game has a lot of potential. Good stuff!

me too wat happen

how do I play becauce every time I load it dosent work.

My video on this game.

No sounds for melee attacks or casting spells are missing.

I sent 4 Dollars for your awesome game.

The lady at the very beginning won't let me leave even though I put on pants.

The game is an absolute masterpiece! However there is a point id like to make:

Is there a specific system requirement for playing the game on mobile browser. For example on kindle fire browser the game keeps crashing — I'm required to reload the page every time, making it impossible to play. Maybe all the assets are too much to handle, and as this will be a recurring theme in mobile devices, maybe tweak the mobile version to lessen the load on processing? THANKS!

you should add a fast travel mechanic

Love the game. I like the number of quests and less emphasis on character skill building (except via equipment).

Long range combact is really bad, after one shot, its almost impossible to land second shot unless the monster is right next to you. Its better to switch to sword. Please change the long range: Projectile to hit any monster that crosses its path. Currently if the projectile reaches the targetted tile and the monster is on it, only then it registers a hit.

Hmm, the cursor shouldn't make the character face in that direction all the time, it is a little troublesome when I am fighting mobs.

But overall, it is a good game.

I see the potential of this game. Have you considered finding a Chinese translator?

I downloaded it but i don't know how to run it.

Wow! This game will be a great MMO for sure! It's already pretty complete and has a nice story behind it! keep up the good work!

Have you considered participating in our GDWC #gamedev contest?

Check out our itch.io page for more info :)

help me fix this error please! 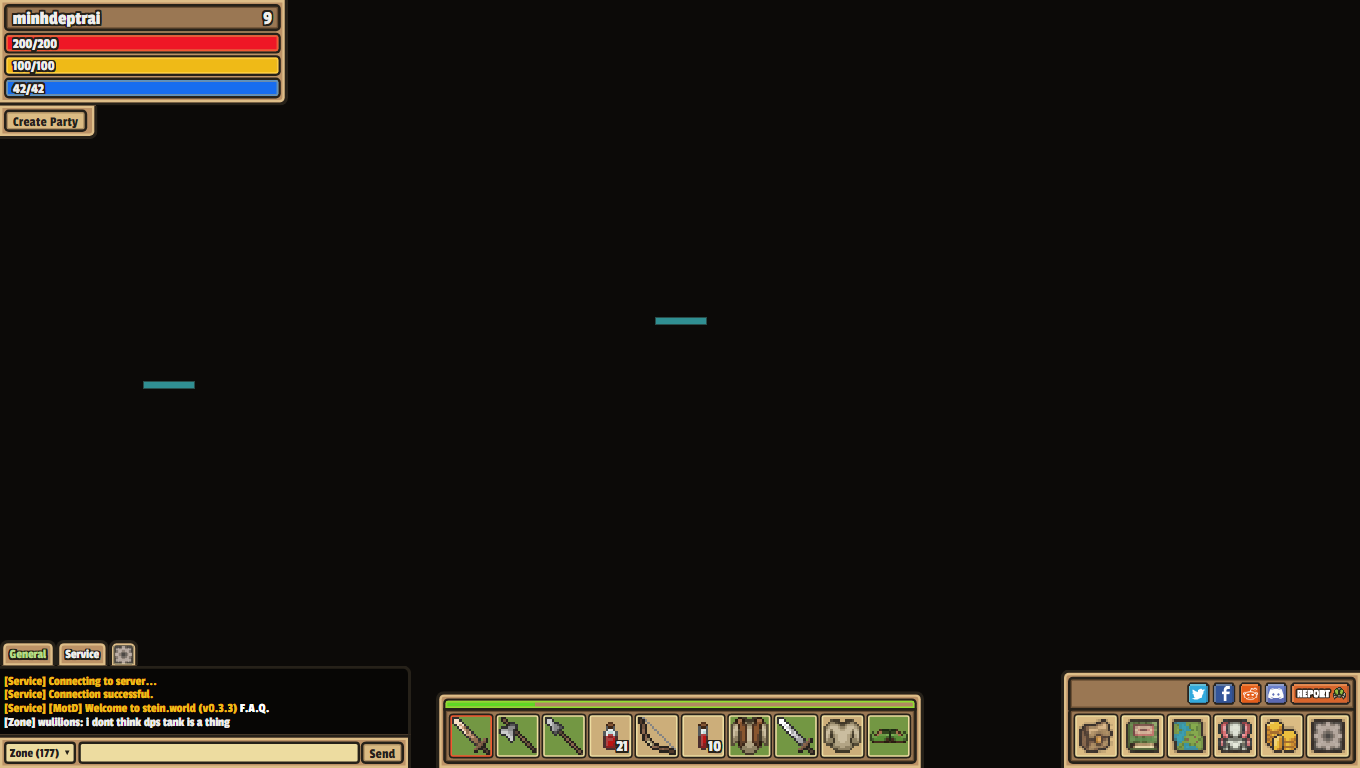 These are the beginnings of a great MMO.

I need a password to play the downloaded version.

what is it. I cant unzip it.